Also please note that since I currently reside in Norway, this article will reflect that fact. Google maps might be more useful in other locations.

What can you do with Google maps?

First I just have to make a comment. I found the warning notice when you start Google maps telling you not to use the application while driving quite funny. I don't know why, it just struck me as quite funny.

With Google maps you can find a business, find a location (address, city, etc), get directions from one point to another, choose between satellite view and map view, zoom the map/satellite view in and out, and receive traffic info.

The business and location find feature, I never could get to work within Norway. When I searched for businesses Google maps always told me that it didn't find any matches. I tried searching all sorts of different combination of places, addresses and cities in Norway, and I never managed to get any results. Again I was just told that Google maps didn't find any locations. I tried to find locations in Norway for about 45 minutes before I decided that I wouldn't waste more time on it. The conclusion here is that this feature is useless in Norway. 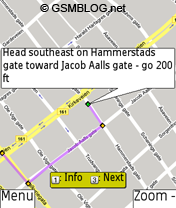 I had expected the satellite view to be quite crappy on a cell phone due to the small display, but I was actually very surprised to find it worked really great. I must here admit that I have a N80 with a much higher screen resolution than most cell phones which could have something to do with it. The maps are also very easy to read and look quite nice on the screen.

The direction feature actually works quite nicely even in Norway. You have to set a start point and an end point, either by searching for them with the find location feature, or by manually plotting them in on the map. Of course in Norway you have to plot them in manually seeing as the find feature just won't work. But if you have a general idea of where you are going it works fine.

You start the directions after you've plotted in your start point and your destination. The route is drawn on the map (or satellite view). The phone will give you directions, stating what streets to turn onto, what exits to take from traffic circles, etc. It also tells you how far to go on each street. When you have finished an instruction you hit 3 and it gives you the next instruction. Of course the instructions are measured in feet and miles, making it hard for someone used to the metric system to use it.

I have no idea how traffic info works seeing as it isn't available in Norway.

Google maps is basically a "poor mans GPS". However the data costs would be so huge unless you have an unlimited data plan that it's probably cheaper to buy a true GPS solution. Especially since a true GPS system is so much better than Google maps.

Google maps it basically totally useless in Norway. I could see how it could be more useful in the States, but I still have my doubts about it. I can't really see why anybody would choose to use Google maps.

If you want to try out Google maps on your own cell phone, just point your WAP browser to http://www.google.com/gmm

GSMBlog
—
Google maps - do you really need it?
Share this